fiction from my head

The Lawrence family’s accident occurred on the dark and winding California coastal highway in 1974. Richard and Candace sat in the front of the van passing a joint as they made their way north from San Francisco. Their nine-month-old daughter, Skye, was asleep on an Indian print cloth spread across the brown shag in the back.

The van was their home. It held a tiny wood burning stove and orange crocheted pillows on a green banquet. There was a rocking chair with a bungee cord laced through its slats tethered to a cup hook on the wall. There was a photograph of horses in the snow. The loft punched through the roof made the vehicle top heavy, so they took the highway at a gracious lope.

They had been all over the U.S. in that van. They followed bands, marched with pickets and threw flowers at cops. They were stubbornly in love and unwilling to admit that the fun of it had unraveled a good bit with Skye’s birth. Still, neither of them intended to call it quits. Not then. Not ever.

And then a coyote had stepped out of nowhere into the road. There was a fall of rock on the right, a cliff on the left. It was inexplicable that the animal should be there, yet it stood in the dark with the moon crossing in front of it like a river. Richard saw the red eyes only two seconds before they would have hit the animal. His compassion was automatic. Without thinking, he jerked the wheel to the side and stomped the brakes. The van rolled onto the driver’s side and slid, in cinematic slow motion, through the metal guardrail, falling through forty feet of air before making impact with the smooth face of the rock and sliding down the cliff face. When the van stopped it was because a sturdy little bush had become impaled through a broken window.

Skye didn’t recall that she had crawled around the crumpled van for four hours in a soiled diaper where her father lay dead and her mother unconscious before another car’s driver decided to investigate the broken guardrail, saw the still steaming van below and called for help.

It took almost a year and a half before the twenty-five year old mother had recovered enough to be reunited with her two-year-old daughter who had spent those many months in the crowded foster home where she was kept alive but was not loved. Ever after, Skye insisted that what she wanted of her mother was to never be apart. And she would like some baby sisters.

Even if she’d been capable, Candace had no interest. It took her many years to accept her wheelchair bound condition so that she would no longer quake with frustration at how difficult the simple things had been made. Did anyone know or care that she couldn’t reach into the kitchen cabinets? Did anyone care that she wanted her husband back?

Eventually, her spirit healed. Her present life, with her daughter, with the flocks of parrots overhead, the palm trees, its middle-aged peace had made her philosophical about it all. She had come to believe that life’s transitory nature made each passing moment as precious to humans as a great work of art, and yet to God it was no weightier than a barroom joke.

She would stand with God.

The two boys were suspended in the air. The older one was up so high he was only visible from the shoulders down, mid leap, knees bent, arms thrown back. The younger was further away and lower. His arms were reaching upward as if to pat the faint dapple of clouds and the one thin streak of a contrail. His flying hair covered his face, but there was something ecstatic about his posture, something that said he was happy to be aloft. Neither boy showed awareness of the visible bits of the world below: a utility pole with its drooping lines, a bit of house roof, the tops of trees. The trampoline wasn’t visible at all.

The end of summer was tomorrow, and Skye wanted to be finished with these children, but something was not quite right with the younger one. It needed to seem that gravity had not forgotten him, that the Earth would pull him down, but there was something balloon-like about him. It had to do with his thighs and bare feet, the angle of them. Perhaps it was okay as it was and she could just no longer tell. She stepped back, half perched on a paint-spattered stool, and considered them.

Maybe she didn’t need to feel so final about it. The day before she returned to teaching had always seemed a deadline, the demarcation between much leisure and little, but this year would be different.  For the past four she’d taught elementary special-ed in Everglades City, which had meant being on the road at six a.m. and often not starting back again until five or six with forty miles of dark Tamiami Trail before her. But this year, she had a new job at a new school only five blocks from home. During the three days of pre-planning she’d been home every day by four. Besides, her evenings wouldn’t change. She would still hide here in this garage studio thinking of her canvases and paint and willing herself not to think of the sick, sad, distressing lives of her students: her psychotics, her schizophrenics, her abused. She would be back here again tomorrow so what did it matter if she was facing a new painting or an old? 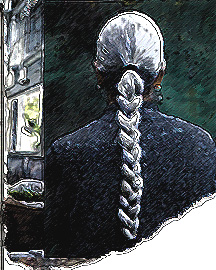 There was a knock on the studio door. She stood, but the door was already opening and her mother, Candace, was already guiding her wheelchair in. On her lap was a plate of cookies and a thermos. “Sorry to disturb,” she said. “Thought you might want a snack and also to know what time it is. Eleven.”  Skye took the tray, set it on the stool. She picked up a snicker doodle, bit into it.

Candace wheeled to face the painting. “Love it,” she said. “It’s wonderful. Look at those kids. Don’t you want to be them? It makes me want to get someone to design something to fling paraplegics into the air just for the hell of it.”

“I’ll get right on it, Mom.” At some time during the day Candace had taken the long grey braid of her hair, which Skye had brushed and plaited as she did every morning, and pinned it into a strange and complicated figure eight. It looked like she’d suspended a race track from her ears. She was always original, that was certain.

Candace turned to face her. “The world would be as amazed by your work as I am if you ever showed them to anyone. Look at them.” She waved her arm toward the canvases leaning three or four deep against the wall. “They want to be seen. They want to be bought.”

“They’re not worth the paint I waste on them.”

“You are not my daughter,” Candace laughed. “I must have stolen you from your real parents who were apparently statisticians.”

“Give it up, Mom. And anyway, something’s not right. I’m not sure how to fix it.”

“Well,” said Candace, “then you must change the focus.” She waved her arm as if producing a spell from a magic wand. “Play hooky at least. Stay home and work on it until it thrills you.”

This argument was so old it had become a game between them, but one Skye didn’t feel like playing just then. She brushed crumbs from her paint spattered tank top. It had so little shape remaining; it should go straight into the garbage.

“You’re only twenty-seven years old. Screw all this. Go to the beach. Take off on some cross-country adventure. Drive to Nova Scotia. Get a new job. Date someone. Anyone. A different new job. Shake things up a little.”

“Mom. Not one word you said sounds sane. As usual.”

“I know,” Candace held up her hand. “It’s fine. You’re fine. Everything is fine.”